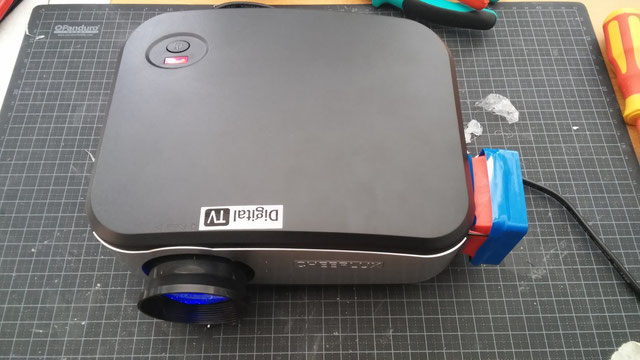 On Ali-Express you can get cheap LED-projectors for about 50€. Of course this made me curious what to expect from such an offer and how the quality of the picture would be. So I ordered a CHEERLUX C6 Mini LED&LCD Projector during the last Ali-Express Sale. Thanks to the domestic shipping it arrived really fast in only 3 days. Which is nice, because Ali orders usually take 3-4 weeks to arrive. 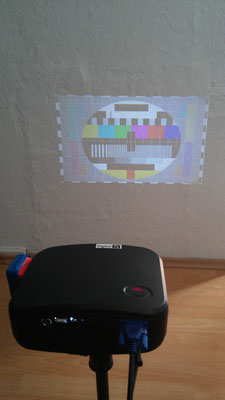 So the projector arrived and the first thing to do was of course unboxing and firing it up. The picture quality was higher, than what you would expect (yeah!), but the noise from the little cooling fans was also higher…

The next step was what every good hacker would do: open the thing, have a look inside, analyse and improve stuff.

Btw: the picture shows the end-result from this hacking-session with the cooling fan attached to the lower right side of the housing. 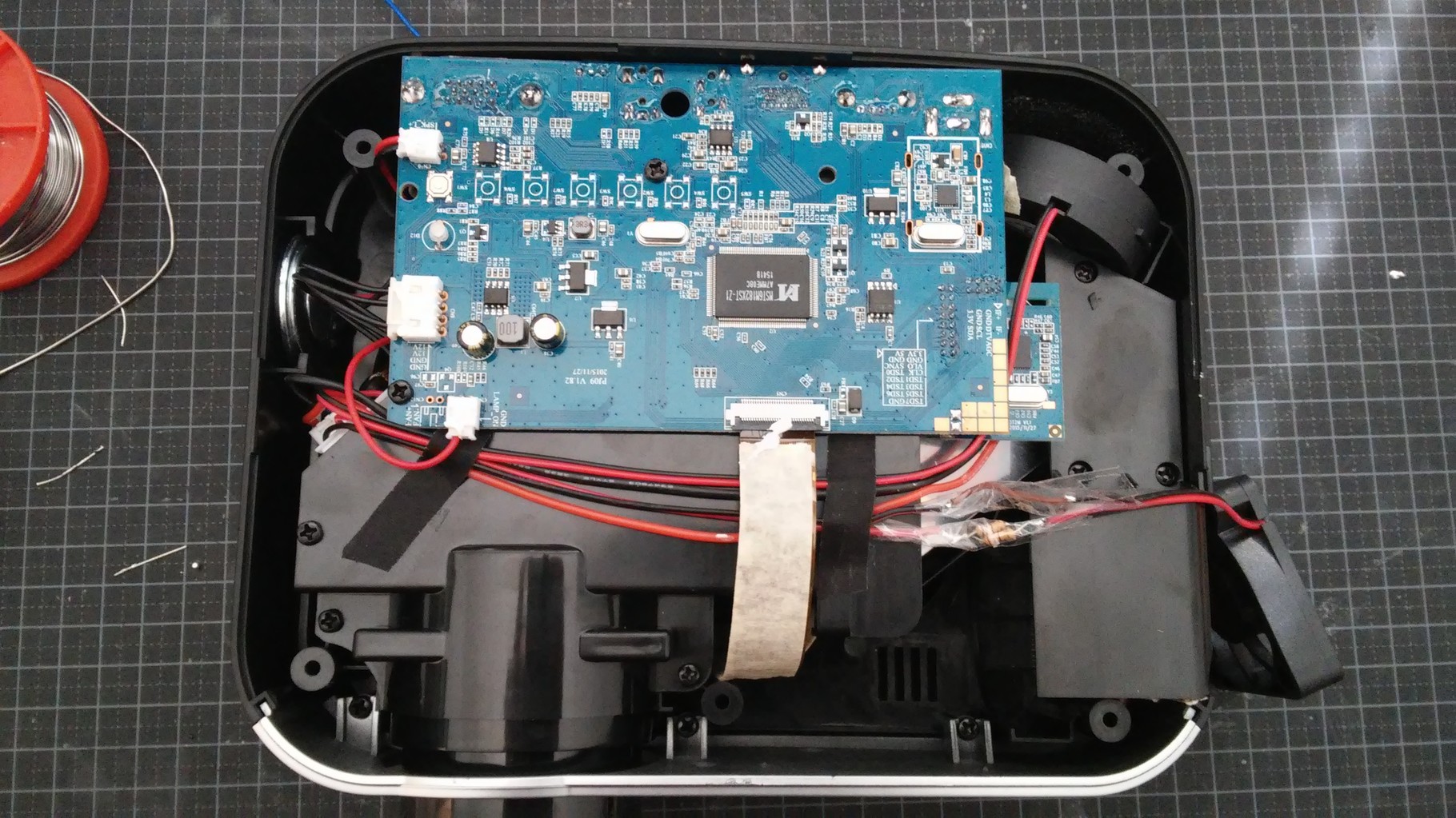 The interior shows a quite simple construction. There is one big pcb, that controls everything and below that there are some optics. The optics are similar to most DIY-projectors. There is a 50W LED as light-source with a reflector, then the LCD-display between two fresnel lenses, a mirror and the lens. 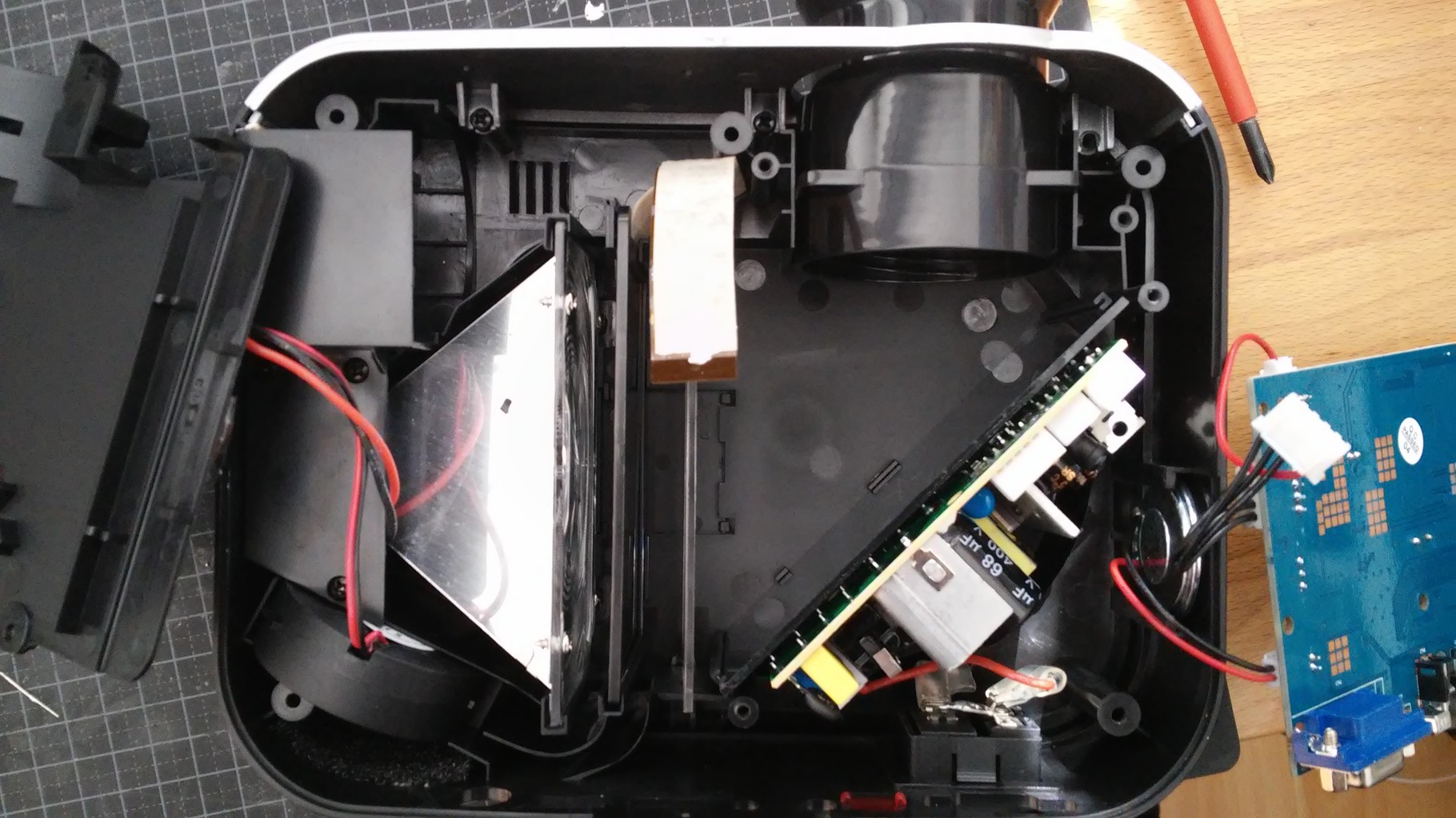 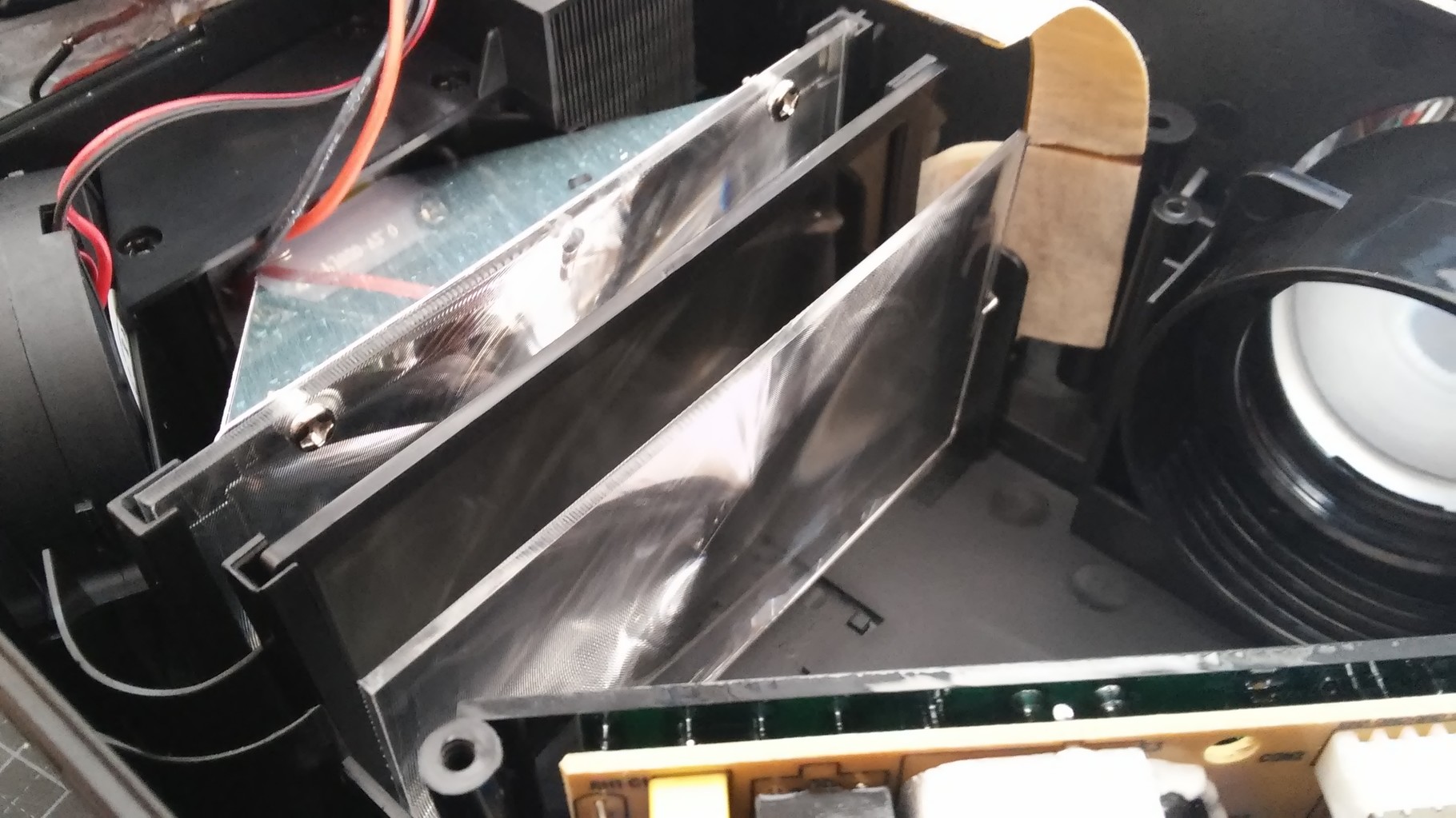 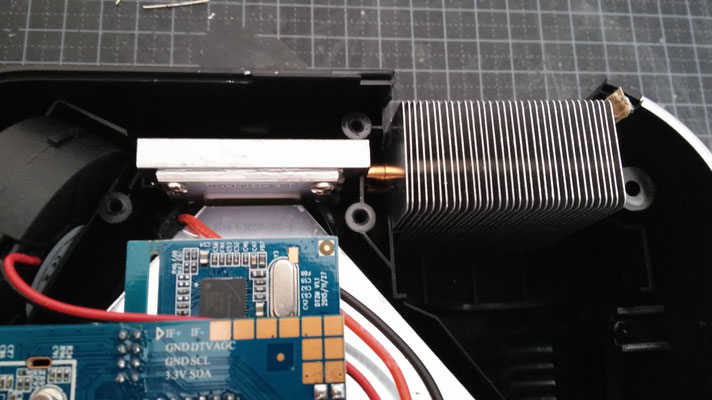 The cooling fan of the LED is the main source of the loud noise. There is a small heat sink, that’s being cooled by an over-powered fan, which blows air through the heat sink out of the housing. The original openings in the housing were not very big, so the airflow was severely limited. I’m sorry, that I didn’t take any pictures of this but you can see it in the product pictures from Ali-Express. 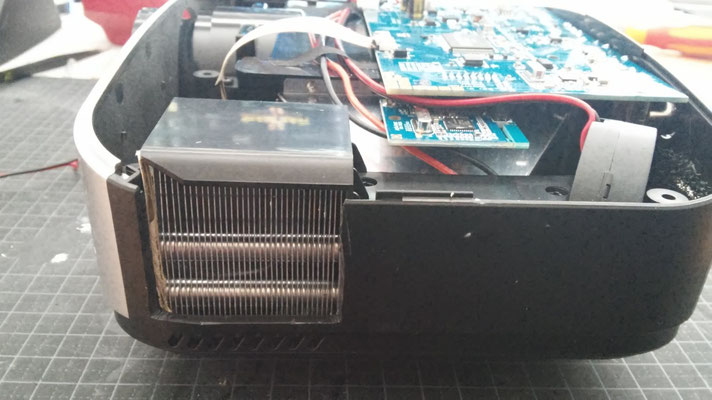 My idea was now to cut a bigger hole in the side, to allow a better airflow and to attach the throttled fan outside, so it could suck the hot air out of the projector. You can see the result of this plastic-meets-knife action in the first picture above.

Throttling the fan was quite simple, I just soldered some resistors in series to the fan. After some trial and error two parallel 100 ohm resistors gave a good result. In the picture left, or somewhere around here, where I am testing the fan, you can see me testing the fan. I need more text to fill this paragraph. 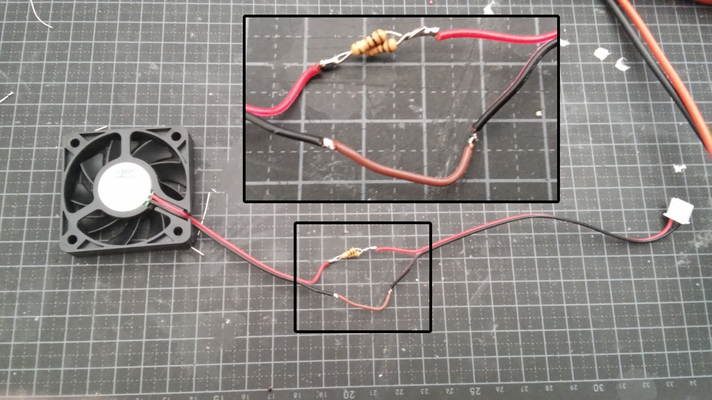 I didn’t want to just hot-glue the fan to the side of the projector, so I designed a nice cone shaped holder in SketchUp and printed it on the modded Shapeoko 3D printer. 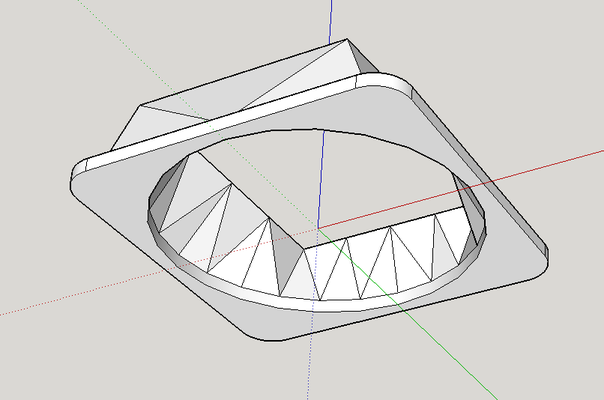 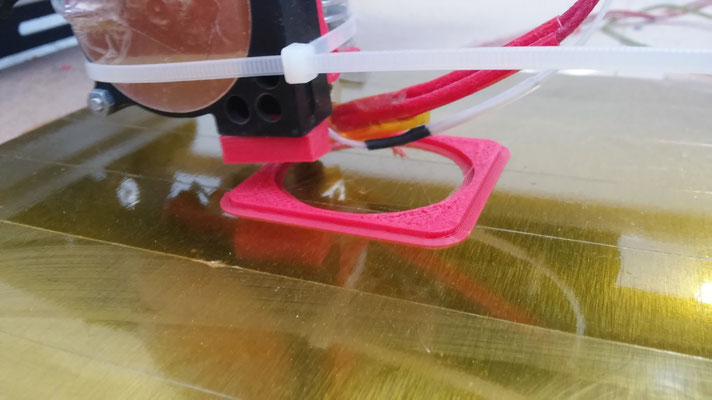 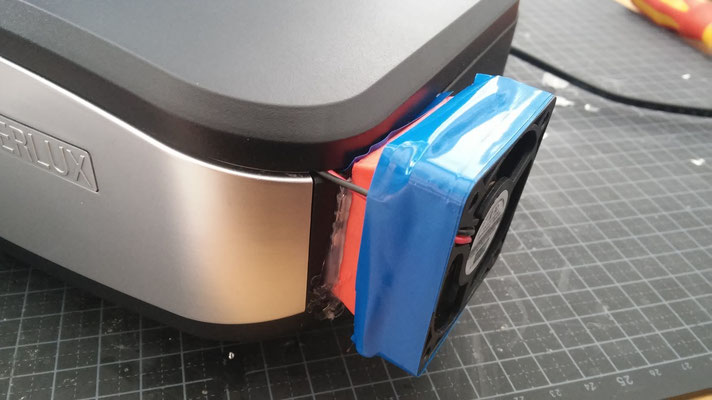 Here you can see the end-result. I used hot glue to put everything together and used some blue electrical tape to make an air-tight connection between the fan and the printed part. Because the fan should suck the air through the heat sink it’s important, that there are no holes in the channel between them.

I performed some temperature measurements on the finished build, to ensure it’s working well enough to cool the LED. With an open case the temperature didn’t get over 37°C, and it didn’t go higher than 42°C when I closed it. 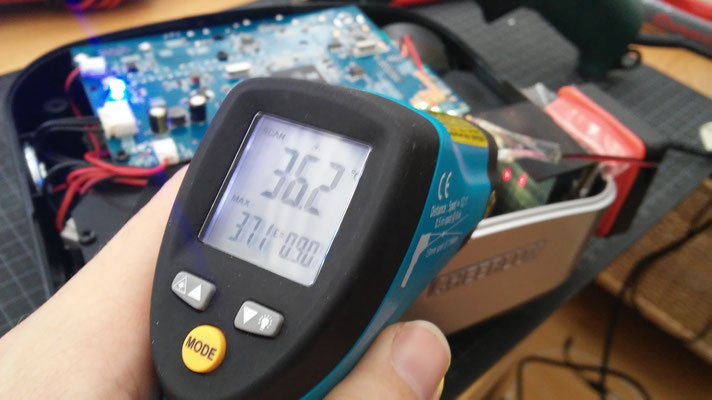 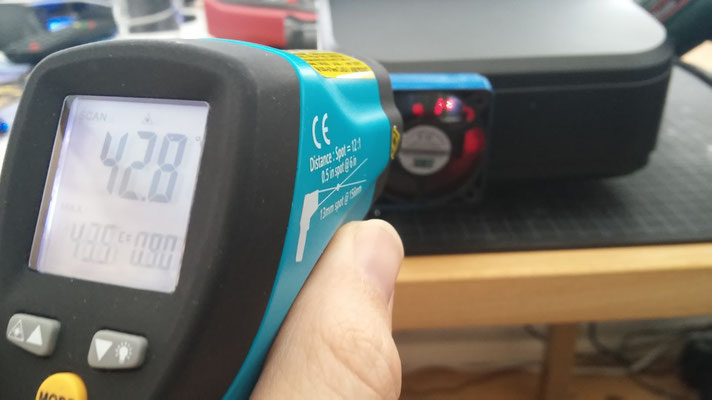 The projector is now a lot quieter and perfect for watching Netflix without noise cancelling headphones. There is still the second centrifugal fan, blowing air at the LCD, but it’s not as noisy as the other one. Maybe I’ll take a look at it some time in the future and improve the little guy even more. The whole project of silencing a projector didn’t take more than 2-3 hours. 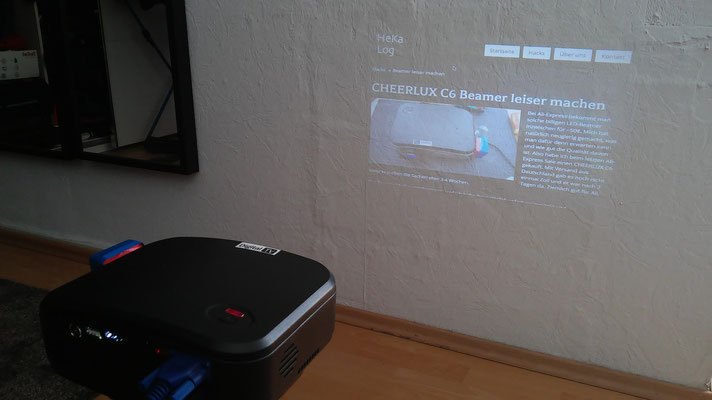