Homepage » Where is Katja? » EuroSTAR Conference 2020 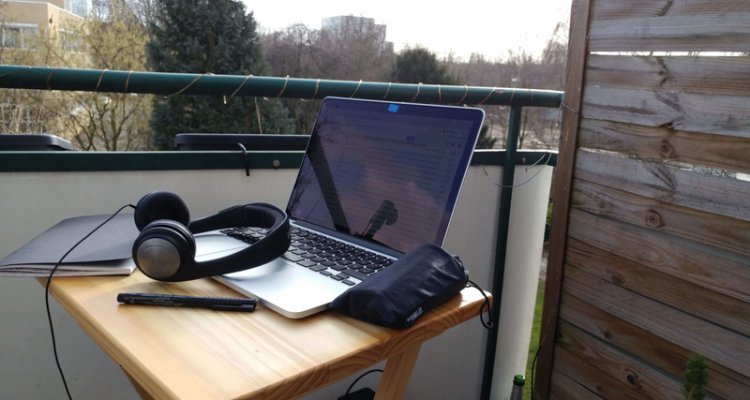 The year 2020 brings a lot of challenges to everybody. To the EuroSTAR Conference team as well. They were having the challenge of finding a solution to how to let the 2020 conference edition take place. The team came up with an online version which made it possible to attend the conference from all over the world. More than 800 attendees joined the conference. But a conference doesn’t only mean great speakers, informative talks, and useful tutorials – it also means networking with attendees and speakers, visiting the Test Clinic, doing softbox testing, join product demos of the sponsors at the expo, and much more. The conference team managed to bring all those parts online. So apart from the tutorials and the conference talks, there were also Ask Me Anything sessions with the speakers, Lean Coffee sessions, informative sessions about topics like diversity, wellbeing and career advance, Yoga sessions, and product demos. It was possible to visit the expo during the whole conference to meet the sponsors and learn about their products. And what was another highlight to meet fellow testers: there was the possibility to do SpeedMeets.

For the tutorial day, 7 half-day tutorials have been chosen by the program committee. When I have heard, that the tutorial will still take place, although the conference takes place online, I was really happy. For me, as an introvert, it is not very easy to join a tutorial on-site. Being in the comfort of my own home, it was an amazing chance for me to take part in two tutorials, which I would have to mentally prepare for a lot if they would take place offline.

So the first tutorial that I have attended was „Think like a tester“ by Rikard Edgren (who by the way won the award for the best tutorial). The attendees learned a lot about different types of thinking and how that can help us testers in our daily life. 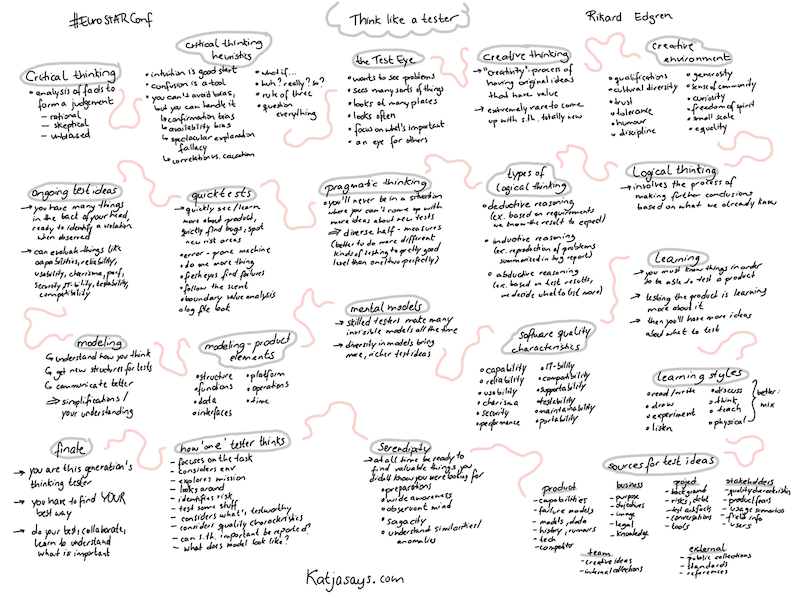 The second tutorial that I’ve attended was „Answering hard questions: A tester’s communication clinic“ by Michael Bolton. In this tutorial, the attendees have learned a lot about what makes questions hard to answer and tips on how to answer them/deal with them anyway. 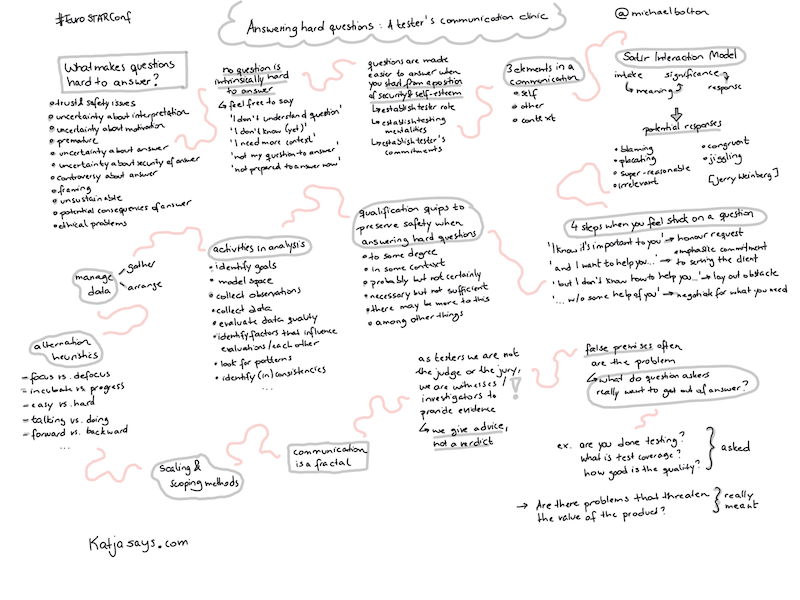 The second day has started with the Keynote „Develop a quality narrative that communicates the true value of quality“ held by Ronald Cummings-John. Ronald was talking about how to create a culture of quality that supports growth, how to increase your level of influence, and how to show the value of your work. 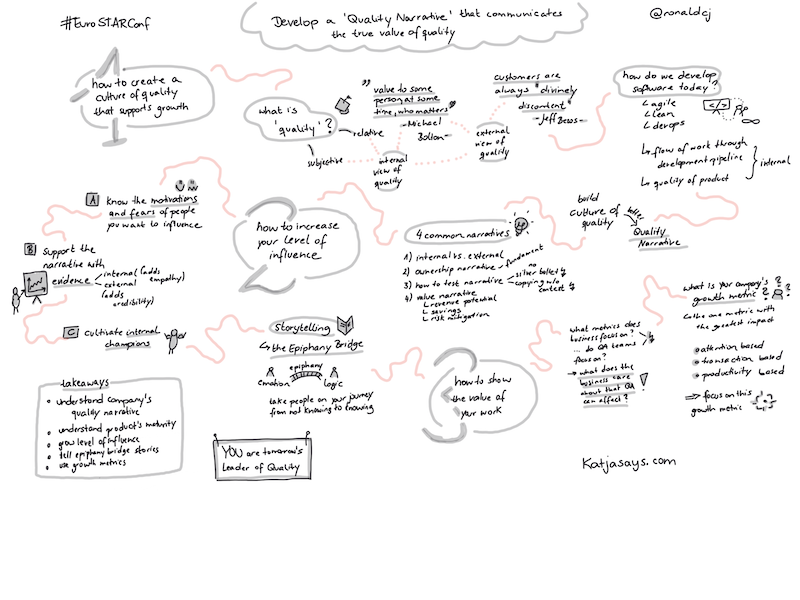 The next talk was „Testing SAFely – Finding your way in the Scaled Agile Framework“ held by Gitte Ottosen. It was about: What is the Agile Release Train? What are the challenges that might occur? And how to overcome these challenges? 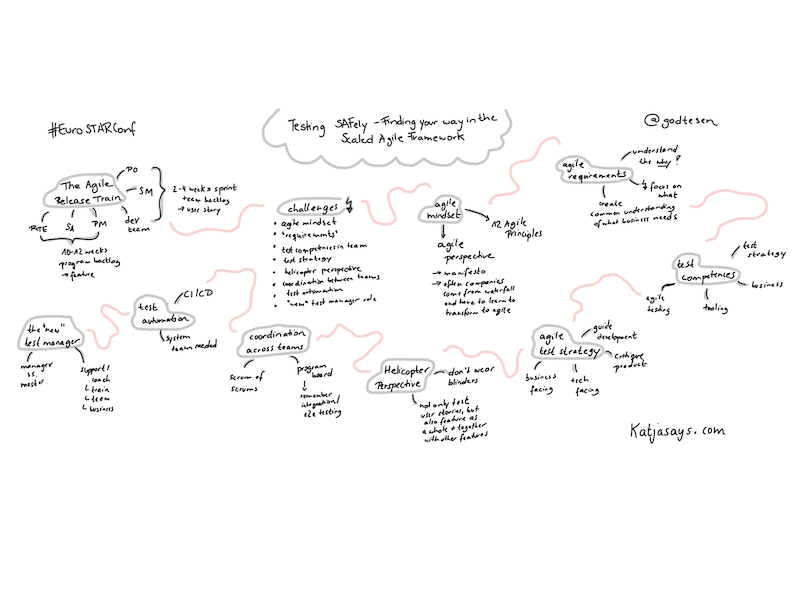 Following Gitte’s talk was the talk „The power of diversity in cross-functional mob programming“ by Cindy Duflot. Mob programming is a way of collaboration that gets more and more common. Look at the sketchnote to find out about benefits, caveats, and learnings. 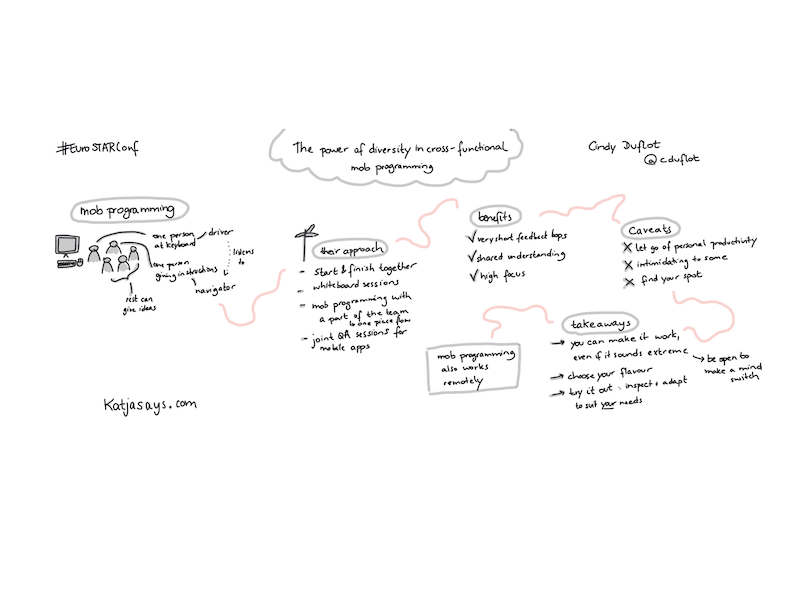 Then it was already time for the mid-day keynote. Abby Bangser’s topic was „Unlock the power of testing in production with observability„. Abby had three wishes:

And that’s how testing in production and observability have helped her: 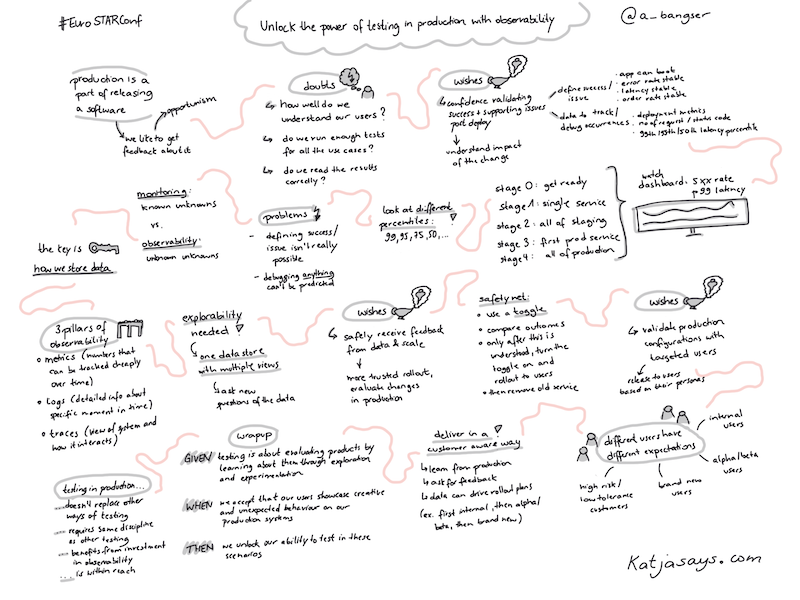 The (testing) world is rapidly changing and that was also the topic of Ryan Volker’s talk: „Your testing habitat is rapidly changing. Are you?“ There are a lot of threats nowadays which can affect the job of a tester. So Ryan had 5 ideas on how to deal with those threats: inaction or action, evolving ecosystem, rise above, promote new voices, and reasons for optimism. 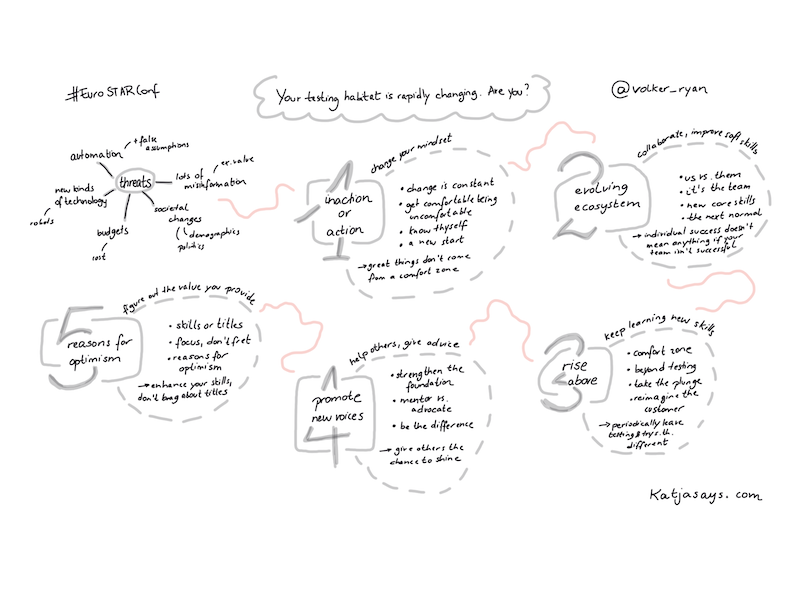 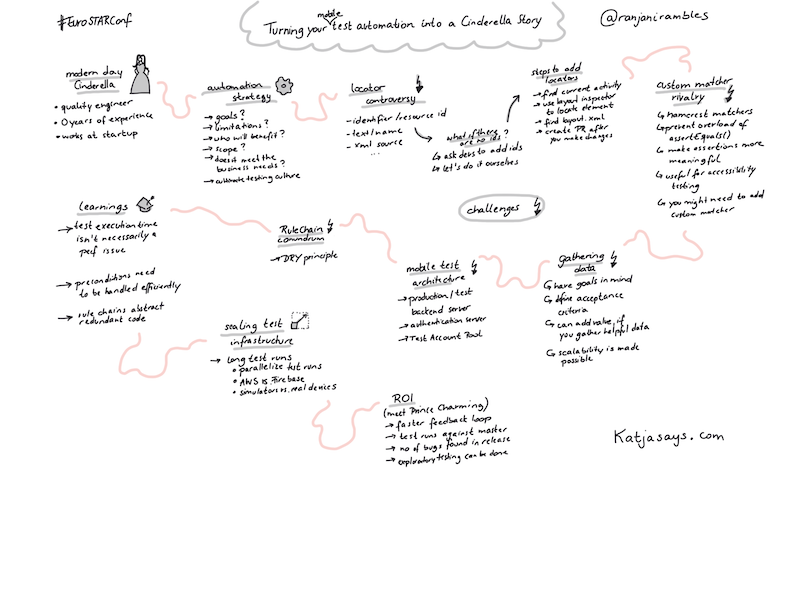 Sanne Visser is the RisingSTAR Winner 2018. This year she was talking about blockchain and „Why bug classifications matter„. Find out more about the relevant taxonomies and how to test them by having a look at the sketchnote: 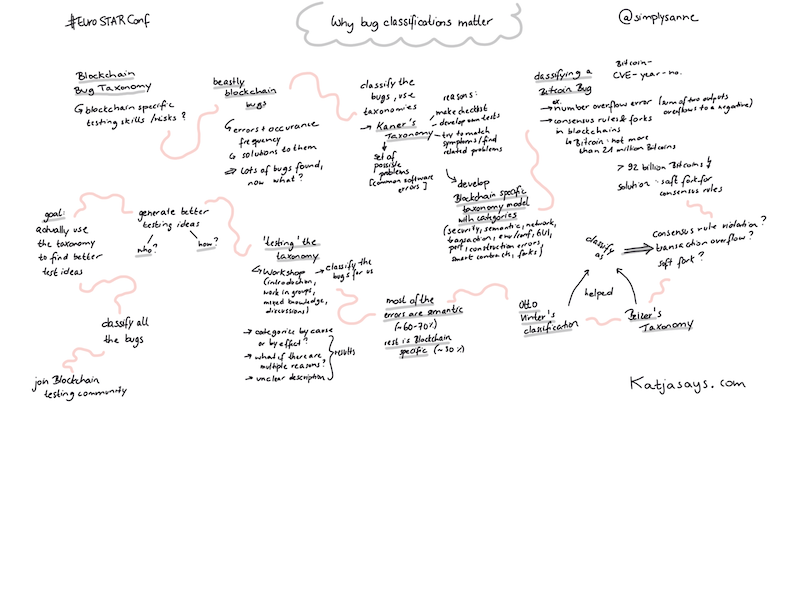 „Let’s talk about problems“ is a very fitting title for the last talk of the first day was a keynote by Michael Bolton, which was more or less a conversation between him and Zeger van Hese. What is a problem? And why are testers good at finding them? When they find them – what will they do with these findings? And how can testers find problems better? 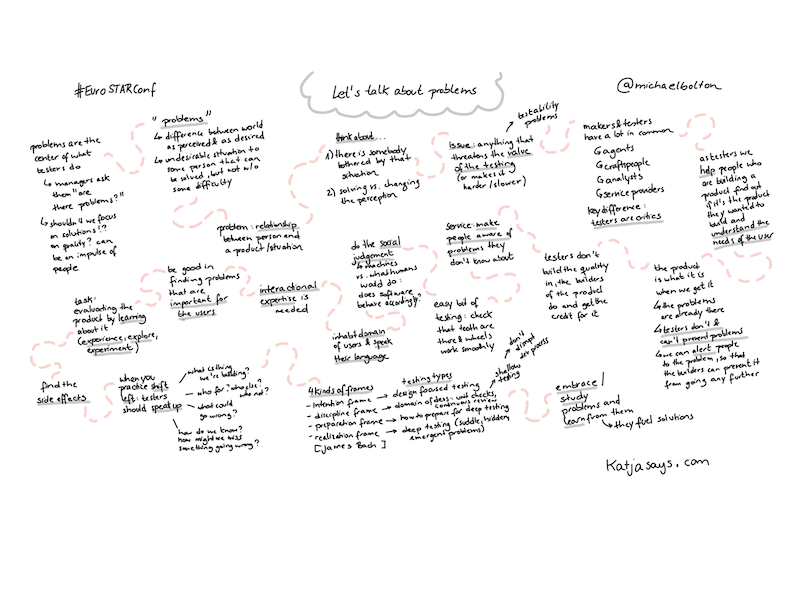 At the end of the day, there was a Trivia Night in which the attendees could attend and show their knowledge about different topics, not just testing-related topics. I didn’t stay until the end but from the chat messages, it seems that it has been a fun evening.

The second day began with a keynote by Tomasz Dubikowski. He was sharing some „Real life stories of microservices testing“ including stories about micro mindset, contract testing, macro mindset, and the quality doctor’s toolbox. 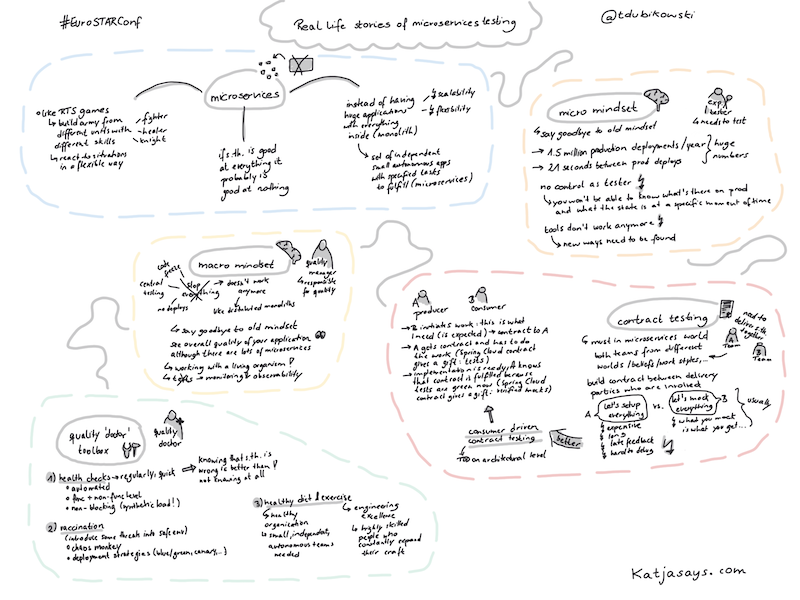 The following talk was „Surviving and thriving in the automation jungle“ by Martin Gijsen. Martin presented the PUPPET Model which consists of the elements: Product, Understanding, People, Processes, Execution, and Technology. 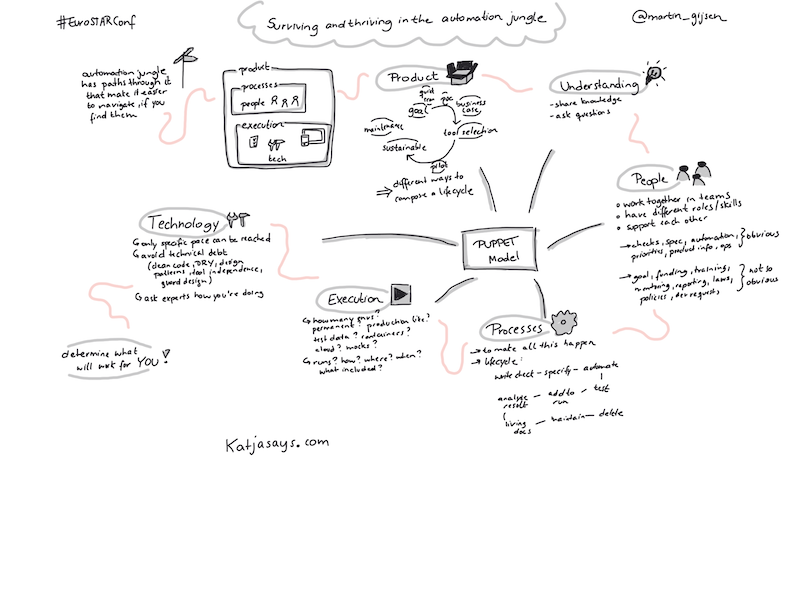 It’s all about making a difference for your users. In „Walk a mile in your user’s boots“ Jørgen Lund shared how you can achieve great results that by improving communication, building a learning culture, and being passionate and enthusiastic. 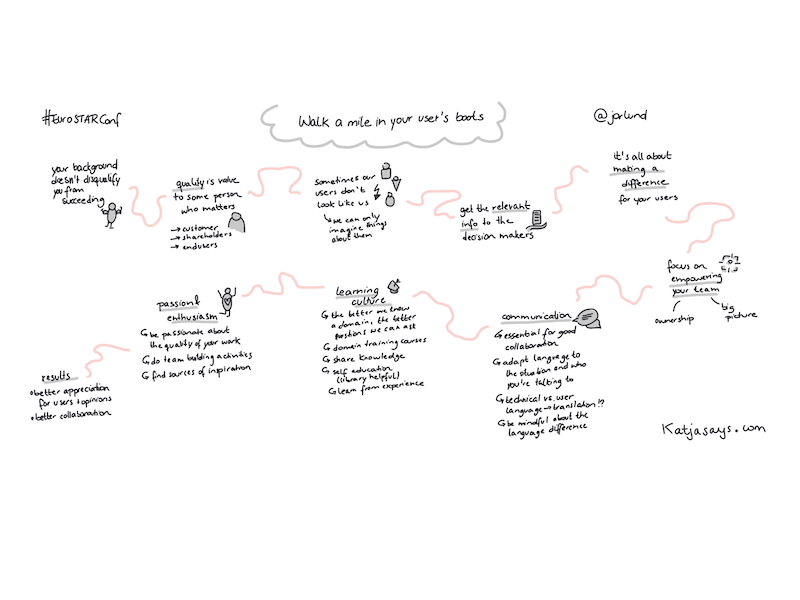 The second day’s mid-day keynote was held by Tanja Vos. „GUI testing: From developing scripts to creating AI-enabled agents“ was all about scriptless testing of the GUI, testing oracles, reinforcement learning, and the tool Testar. 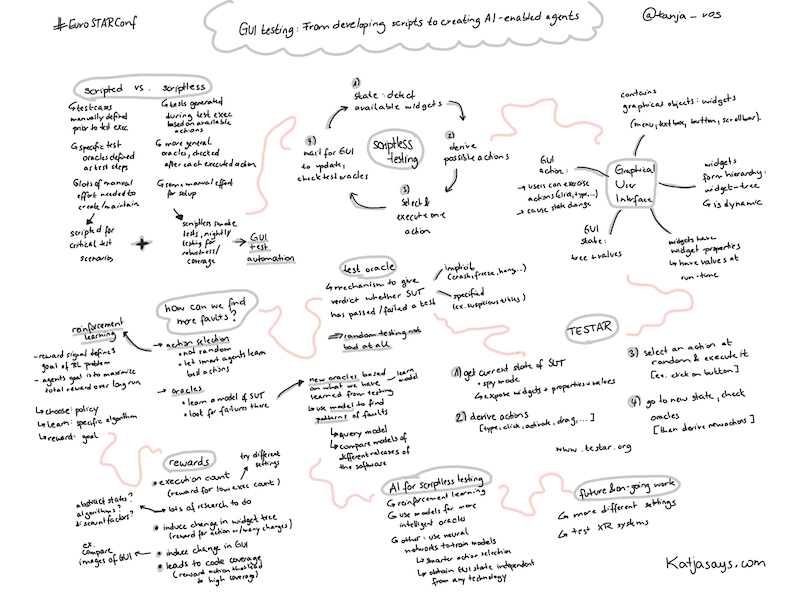 After the lunch break, Andrew Brown continued with „The Peltzman Effect – Why adding more test phases may not reduce bugs„. The Peltzman Effect, also known as risk compensation, is present in the software testing world and other IT areas. Not only this effect but also other cognitive biases influence our way of working. 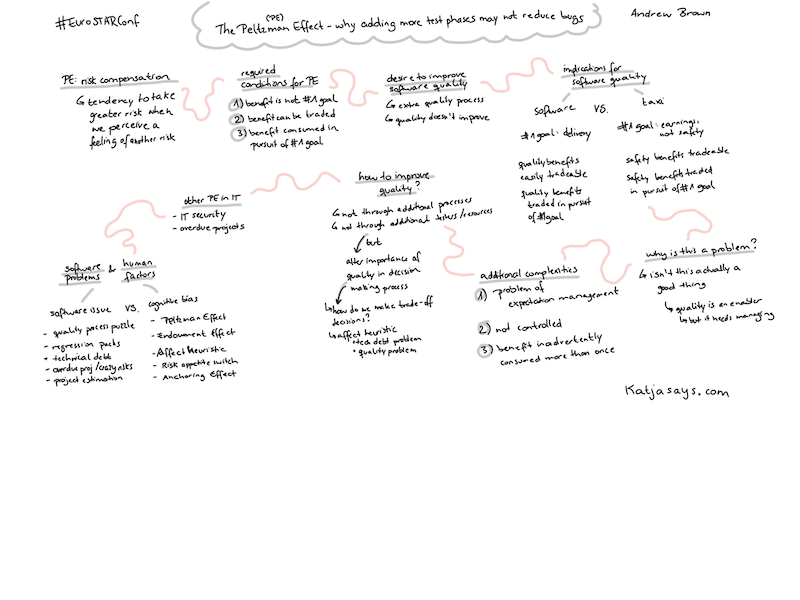 One of the hardest things about testing is showing the value of it to others. Ingo Philipp addressed this in his talk „Doing excellent testing is one thing, selling it to management is another„. He explained 8 selling principles: 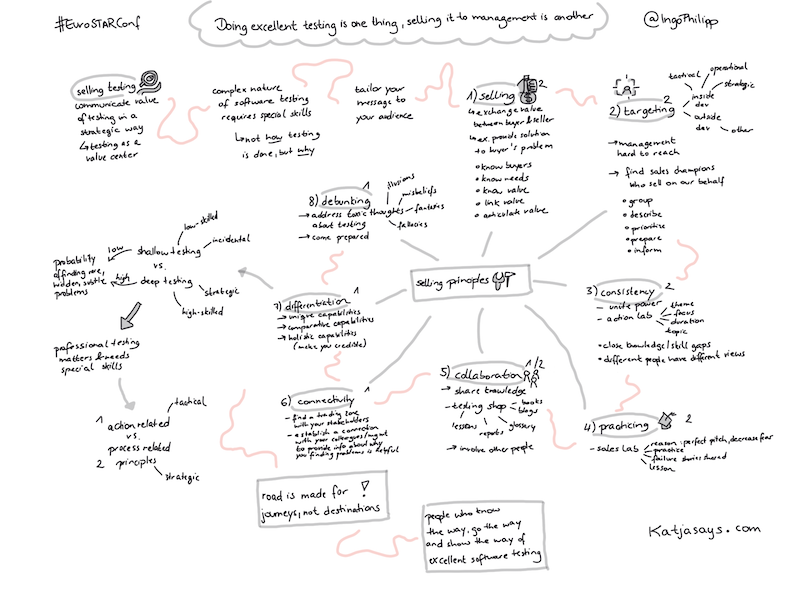 In his talk „APIs are loose in the wild; how do we test them“ Adam Sandman made clear, that once an API is published, it is out in the world and you can’t just change it as this might affect lots of applications. With versioning, looking at data formats and authentication, and mocking, testing of APIs can be made a little easier. 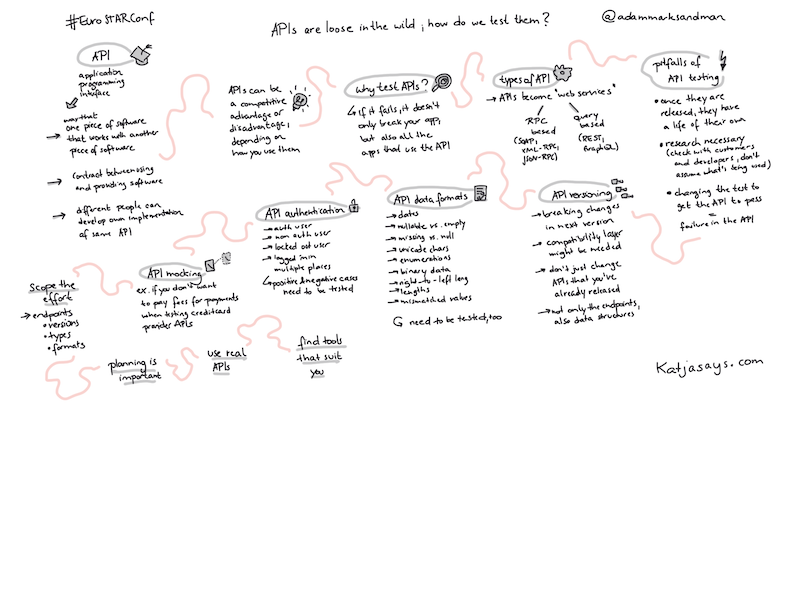 The final talk of the day, and the conference, was the keynote by Jason Arbon about „AI testing in the wild„. He presented us the AI Superpowers and how you can use test.ai to release those. 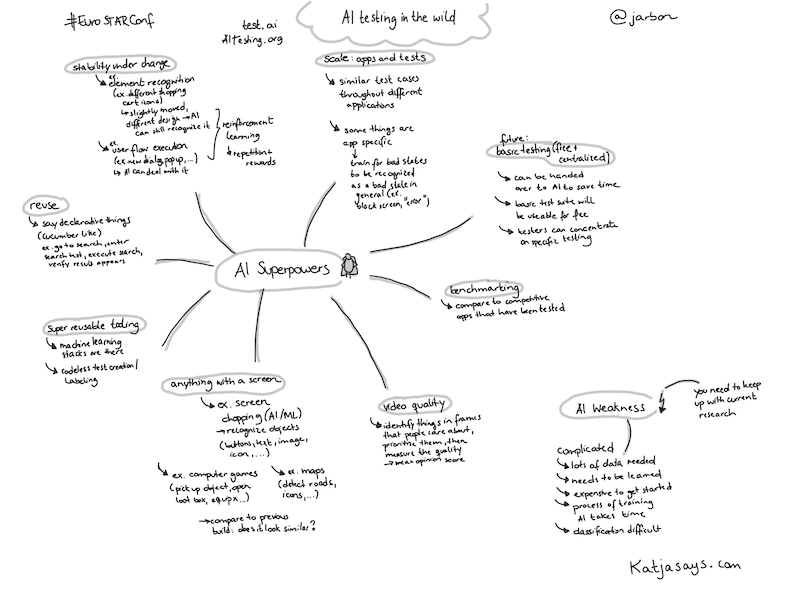 The EuroSTAR Conference ended with the Award ceremony in which the winners of the best tutorial and the best paper were announced. Also, the Testing Excellence Award was handed out and the program committee for 2021 was revealed.

All in all, I can say that the EuroSTAR Conference 2020 was quite a success and that I had a lot of fun being there. I enjoyed the talks, the tutorials, and connecting to the testing community all over the world. Well done, EuroSTAR team!