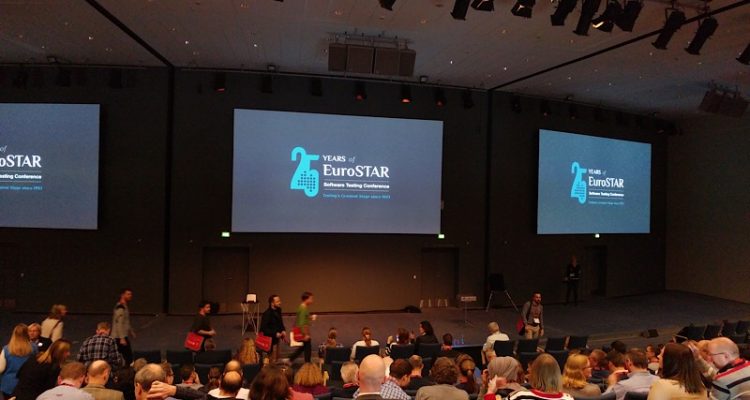 The EuroSTAR conference 2017 took place in Copenhagen. This year was the 25th edition, but for me it was the first time ever to be at this conference. Also it was even more exciting, because I had the opportunity to be a volunteer. So I was either helping out at the registration desk or at the conference talks, when I didn‘t have a work shift.

The conference location was the Bella Center Copenhagen, which is really big and has lots of rooms and auditoriums. The conference expected more than 1000 attendees, so the location was the perfect choice. I enjoyed working at the registration desk, as it was a good opportunity to have a look at a lot of attendees and to get to know if some testers I know from Twitter or so are there as well.

What was really touching was the speech from Kristoffer Nordström, who was talking about his little daughter Linnea, who was diagnosed with a brain tumor some months ago. She gets treatment in Mexico which goes quite well but costs quite a lot of money. So please think about supporting the family. EuroSTAR is selling the „Little book of testing wisdom“ for a price of 25€. All the money goes to the Saving Linnea fundraising.

I had the possibility to see quite a lot of talks. All of them had an awesome quality and were really interesting. Of course I was also sketchnoting during the talks, so here you can see my results:

Michael Bolton
Michael once had the project to prepare people who haven‘t done anything with testing before for testing jobs. He was talking about the right approach, the questions to ask and what challenges might appear on the way. 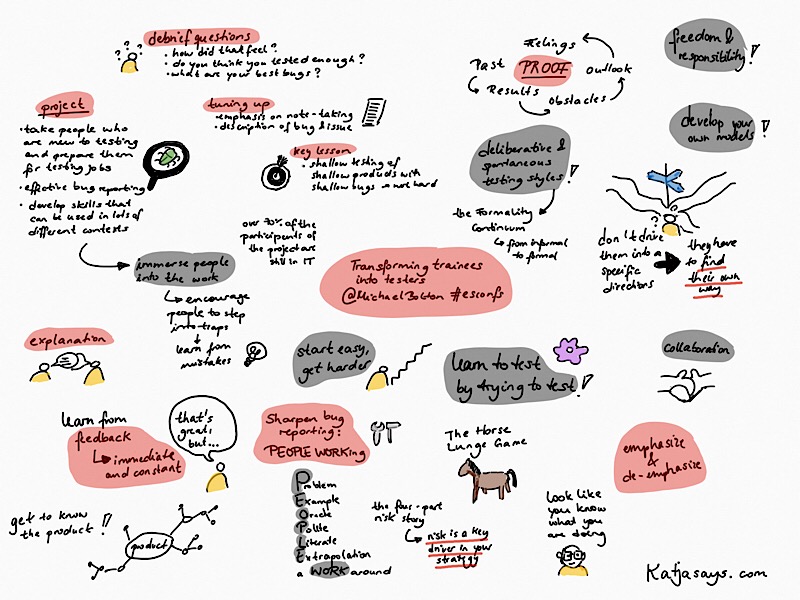 Asking ‚else‘ – a tester‘s magic word

Marianne Duijst
Marianne said that humans normally love to find patterns, but tester tend to try to break them, so they ask for what if something could mean something else? She was presenting some riddles which made the listeners think about different situations and points of view. 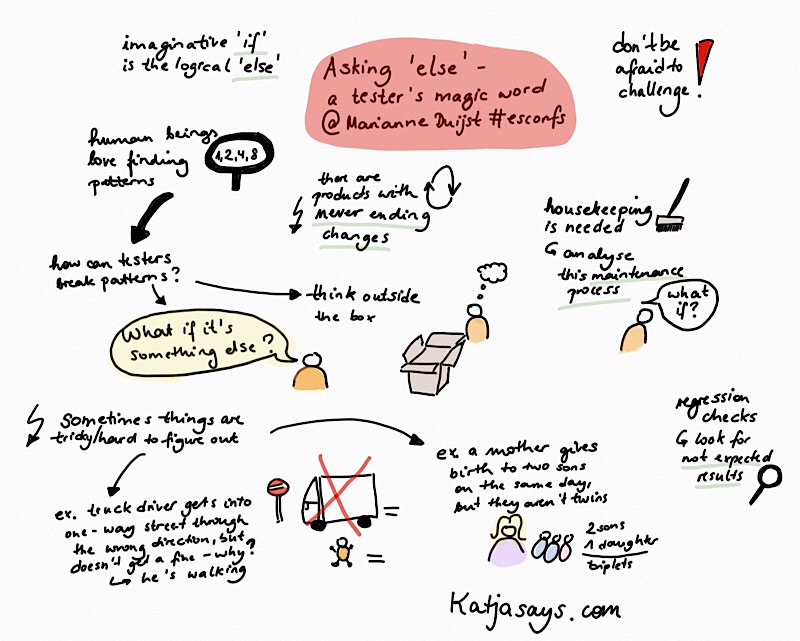 Dorothy Graham, Michael Bolton, Zeger van Hese, Abby Bangser and Isabel Evens were opening the 2nd conference day with lightning talks. In just a few minutes everyone of them spoke about a different topic. So there were things about blaming, tester as island hoppers, optimizing build screens, ‚soum‘ tests and even a rap. 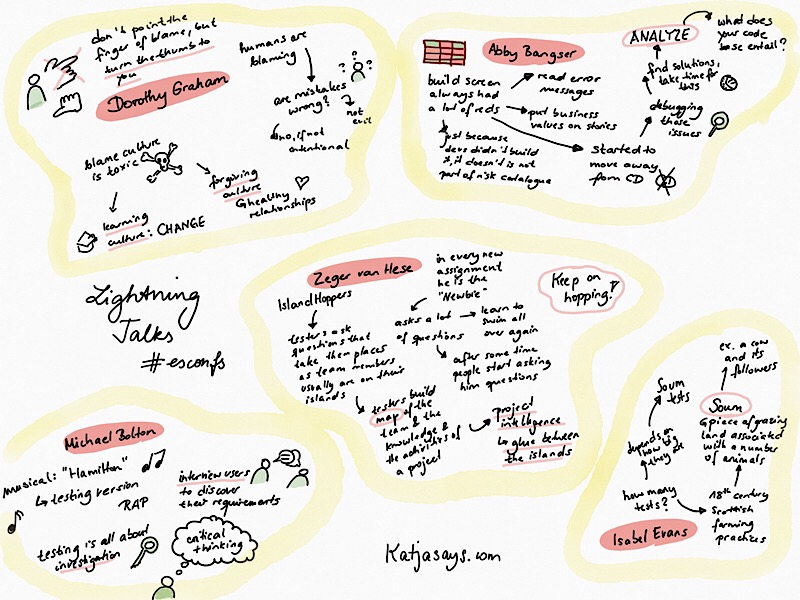 Keynote: Testing with an invisible friend

Paul Gerrard
Paul was talking about the question if bots can replace testers or support them with testing. He spoke about different ways of thinking, thinking tools and questions you have to ask when planning to use a bot that helps you with testing. 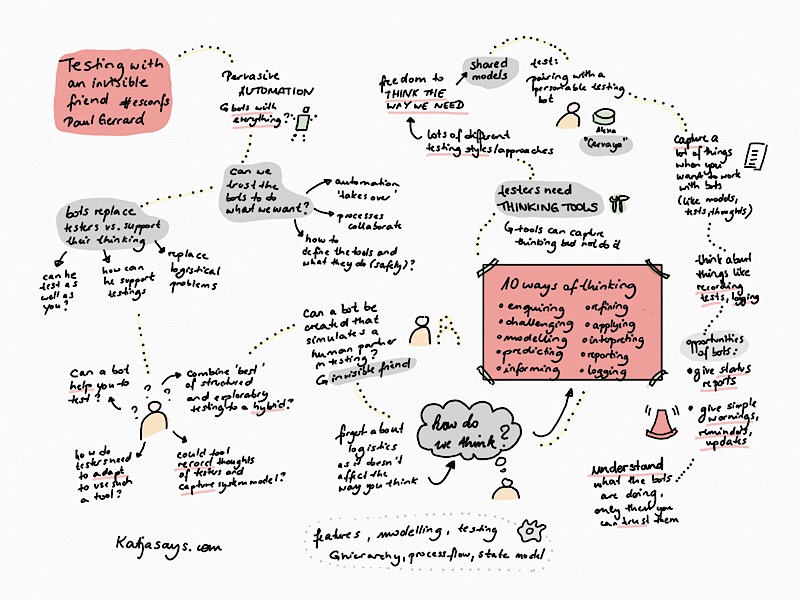 Valeriy Burmistrov
Valeriy was talking about the concept of communities of practice and how to implement them in your company. With Scrum teams getting more and more usual, it is important to think about testing in new ways. 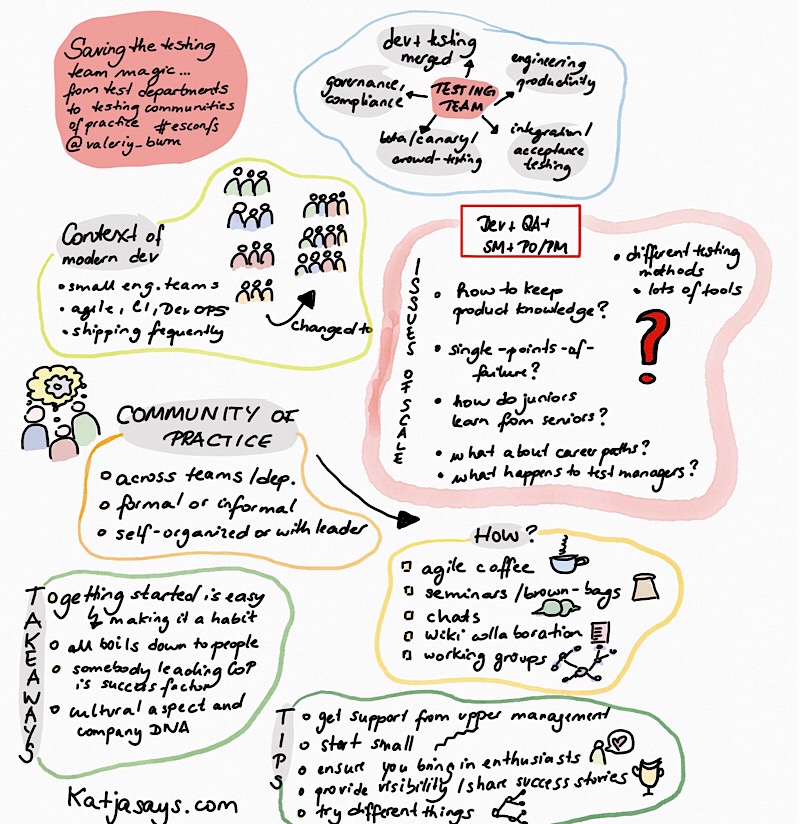 How the Three Amigos made us a more effective team

Sylvia MacDonald
Sylvia presented the Three Amigos principle, consisting of a combination of members from business, testing and development. She was explaining how this principle works, how to include it into your work process and about benefits from doing so. 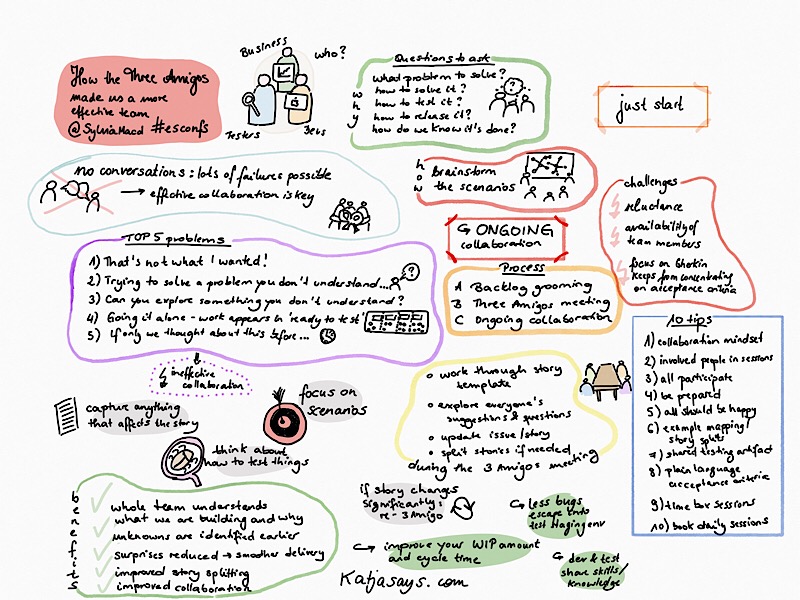 Fran O‘Hara
Fran was speaking about the challenges of agile teams and how a whole team thinking approach can improve the collaboration. He explained how effective teams work (transcendent, autonomous, cross-functional) and how to change the way of thinking. 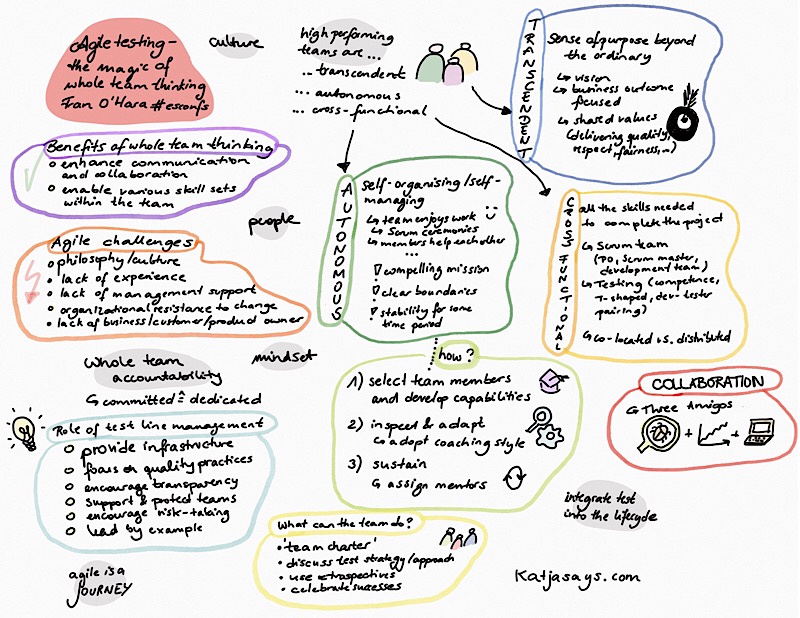 Martin Pihl
Martin‘s session had a really different format. It was about Phil The Tester who went on an adventure of a testing experience. The listeners were able to influence the way the story would continue, but in the end Phil was a flawed testing hero. 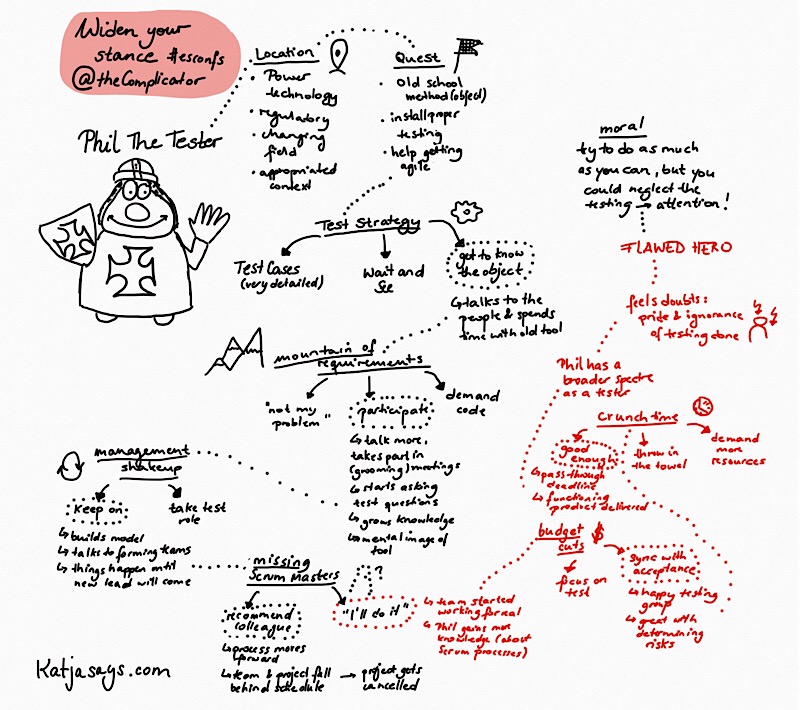 Janna Loeffler
Janna was speaking about Disney‘s Imagineering (imagination + engineering) and how testing works there. She told us about new projects, that the parks are never finished, that a lot of testing is done manually (how cool is that – you get to test the rides before everyone else) and the pressure that is behind this, as almost everyone know what the rides are about and how the worlds that are created in the parks should look like. 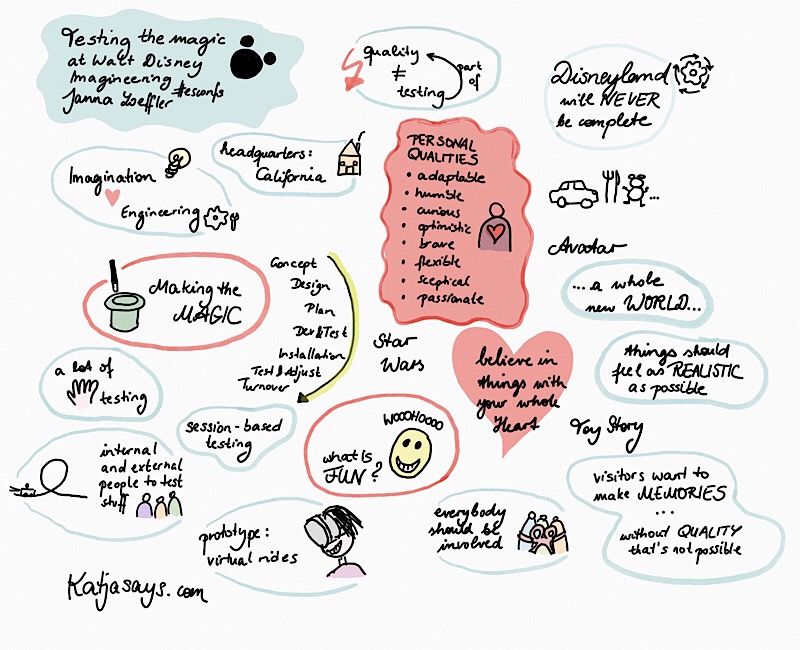 Embodied vulnerabilities – why I am hacking my heart

Marie Moe
Marie was talking about connected medical devices and their relation towards cybersecurity. It was really interesting as she has a pacemaker herself which she tries to hack to get to know more about its security. 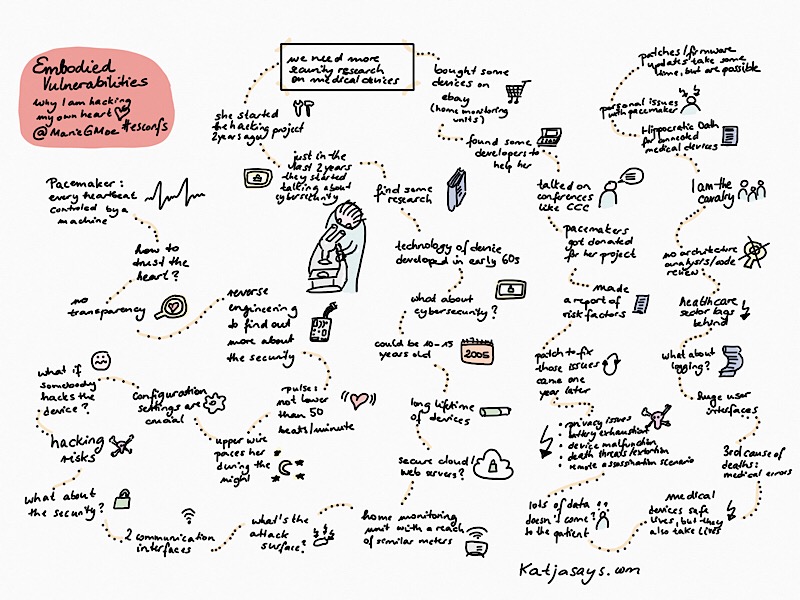 Christian Brødsjø
Christian was talking about how he was invited to help testing the new terminal 2 of the Oslo Airport. He was telling us how they used real people and physical baggage to test if everything works. 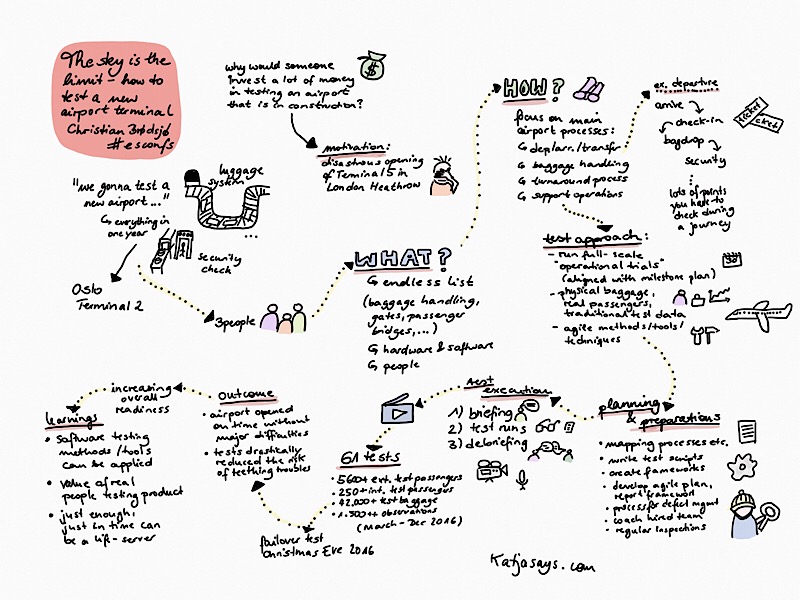 I think the EuroSTAR conference 2017 was a huge success and the speakers and their talks were of a very high quality.

I am very grateful that I had the opportunity to attend the conference as a volunteer and to see a lot of talks. Maybe see you again another time…